Saturday saw a small but select bunch of Supernovites heading west to play korfball on a field somewhere near some roadworks off the Oxford ring road.

With our team already one man down following the shock withdrawal of Joep “Joep” Moritz at 2 minutes past midnight on the day (excuse: “I need my beauty sleep”) we arrived at Oxford via train and car and began to set up camp (Ironically the pitching site was labelled “Sleeping Beauty Camping”). New recruit Jamie “New recruit” Jamie was put straight into action by refereeing the first game whilst Ian “Big Lips” Riddell erected his tent, which this year had the correct poles included.

First match was against Oxford City 1 – not wishing to offend the hosts we thought it would be best to let them win this game. After that noble defeat, what was meant to be a 50 minute break turned out to be a 28 minute break followed by a mad dash back onto Pitch 5 to play Southampton. (A spreadsheet reading error – no names mentioned, but his name rhymes with Randy Posstick). Despite (because of?) the delay, we managed to win; just as the rain moved from “friendly drizzle” to “mean raindrops” and onto “bloody soaking”.

Thankfully, after six years, Supernova had finally got round to getting a tournament gazebo, which we managed to erect with minimal fuss, despite only two sides and a slightly leaky roof. 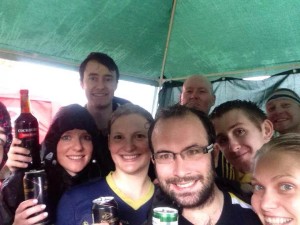 Two other games followed, which were very, very wet. Can’t remember the scores, but Zoe and Pippa decided to play racehorse style (with their waterproof hoods serving as “blinkers”), and the ball we had brought along had an uncanny ability to soak up water that made it at least twice as heavy as it should have been. Special mention should go to what is possibly the worst running-in shot ever (by someone who shall remain nameless (but his name rhymes with Candy Osstick) – Neil “Pinkest Lemon” Kempston will be releasing a video shortly with the the evidence). Ian eventually found his range at exactly 6.8 metres out and slotted in a good few long shots, but that wasn’t enough to save us from being deposited in the bottom half for the afternoon.

Being cold and wet, the only cure was to crack open the port (Cockburn, 2012) whilst Jenny “in cider” Robinson bravely went on a beer run for, er, more cider. Following a brief postponement for torrential rain, the tournament continued. Two further losses were suffered, in no way correlated with the amount of port and/or cider drunk. By this point, it was clear none of the Supernova goals so far had been scored by girls, so Ian bravely decided to handicap himself by swallowing a wasp from his can of Strongbow in order to try and even up the score. (Eventually Pippa “Lap poop bint” Bolton and Zoe “One Zen Dyke” Kennedy scored – yet Eiti “Chairwoman” Stein” didn’t… happy with your AGM votes everyone?) 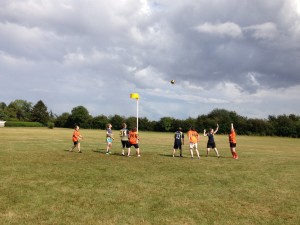 The afternoon passed in a blur of rain, rum, port and beer. In an attempt to win an afternoon game, Supernova nominated themselves as the scratch team which conveniently had a Supernova representative refereeing. Following that convincing and totally legitimate 1-0 win, it was onto the rum (Sainsburys Basics, 2014), and also the final game of the day, which took place in unexpected blazing sunshine against MK Camels. A well earned 3-3 draw (including some long shots from Joe and a nice short one from Zoe) should have meant a penalty shoot-out, except we all forgot that was the case (including the ref), so it was apparently settled by Ian with a round of rock/paper/scissors. Which he lost. Which meant we came last. But at least we were also officially pronounced “drunkest team of the tournament”.

Special thanks to Jenny R for driving (there are some beers we owe you), Eiti for the fancy dress paraphernalia, Neil for videoing, and Jamie for agreeing to come along at the last minute (and ref!) despite only first playing with Supernova 4 days ago. All in all a good fun tournament – here’s to the next one!