A day after Belgium taught England a korfballing lesson in the semi-final of the #WKC2015, Supernova certainly showed their Belgian counterparts Sikopi how well the English can play the sport, narrowly missing out on a famous win on Flemish soil.

On a crisp autumn morning in the Antwerpian suburbs, the hosts arrived uncharacteristically early. So early in fact that it was necessary to trade stories about the Great Barrier Reef, gentrification in our great capital, and exchanged small red processed cheese whilst we awaited the arrival of our hosts and Pim. And boy was it worth it.

As the clock struck midday, Supernova coming racing out of the proverbial traps and Sian and Eiti scored excellent goals from close to the post. Jenny became the third consecutive female scorer as Supernova took control. Pim scored after the opposition had grabbed back-to-back goals to make it 4-2 and Jenny got her second to make it 5-3.

At this stage that Neil clattered his into his player, without conceding a penalty, your correspondent exclaimed “bugger” after being run by his opponent and Pim scored his second to make it 6-4 at the end of the first period of 20 minutes. Cue, wild celebrations by the visitors next to the impressive scoreboard. 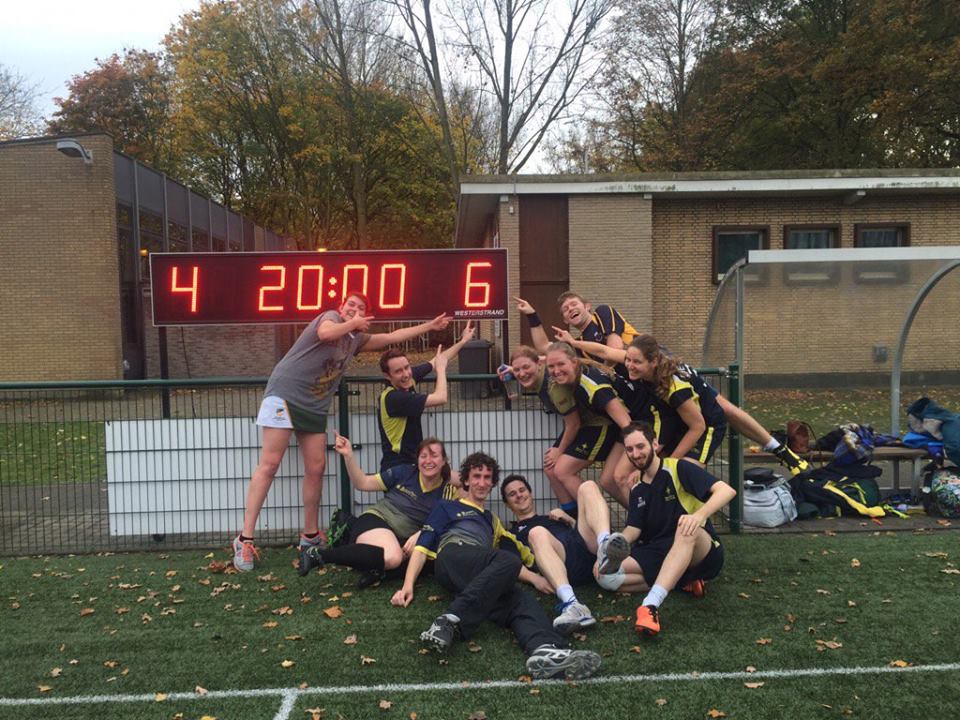 Your correspondent scored the first goal of the second third (what astonishing linguistic chronology you might say) to make it 7-4 before Rob would score Supernova final goal of the afternoon, making it 8-5. It’s difficult to say what changed at this stage – perhaps it was the cherry beer from the previous evening – but the opposition, in particular a man by the name of Wookie, took the game away from Supernova and by the conclusion of the second 20 minutes, the scoreboard read 9-8. Cue wild celebrations by the hosts, and their dog, next to a less-impressive looking scoreboard.

To describe the final 20 minutes of korfball as turgid would perhaps be rather generous. Alas, Sikpoi scored thrice more and the game was theirs by 11-8. The full-time whistle sounded, Supernova gave the opposition three cheers which, unbeknownst to many of the English present, is a Belgian ritual reserved for juniors under the age of nine. 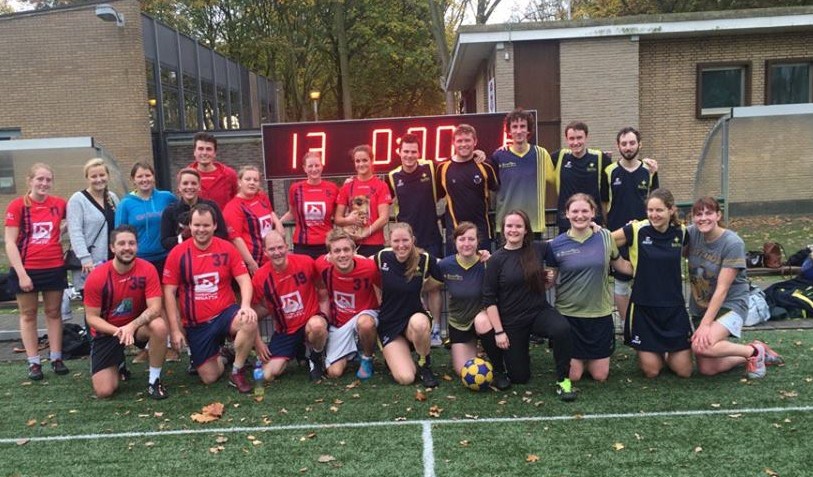 Some nudity and hot showers followed before Sikopi laid on a veritable feast for the hungry Supernovans. Rob wolfed down some orgasmic tasting tiramisu with aplomb. A speech followed and, 45 minutes after failing to read the subtle signals that our hosts wanted to depart their clubhouse, central London’s korfball club were on the way to pastures new. On our tram-tastic onward journey, it was felt we’d done ourselves proud and Sikopi likewise.

*I have completed the task – set by Shalcrow – of smuggling three unorthodox words/phrases through.

And as an extra, some photos of when we stalked Korf celebs around Antwerp. 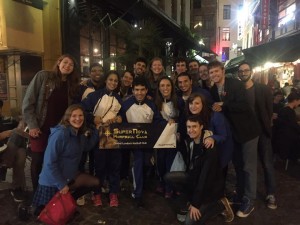 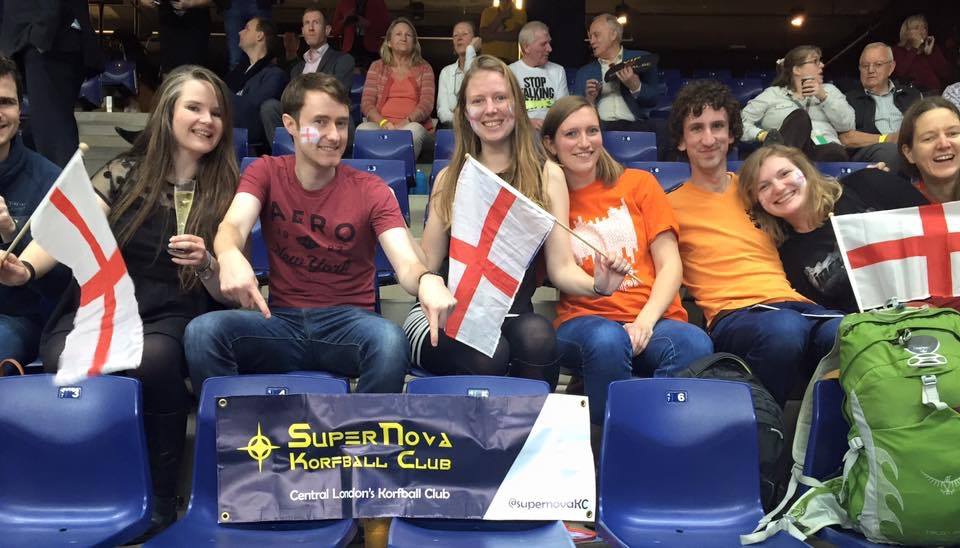 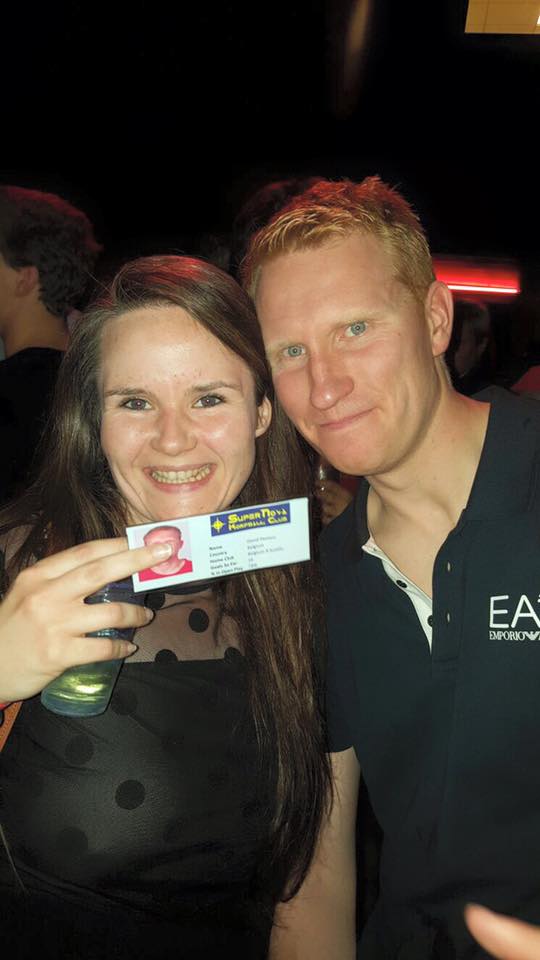 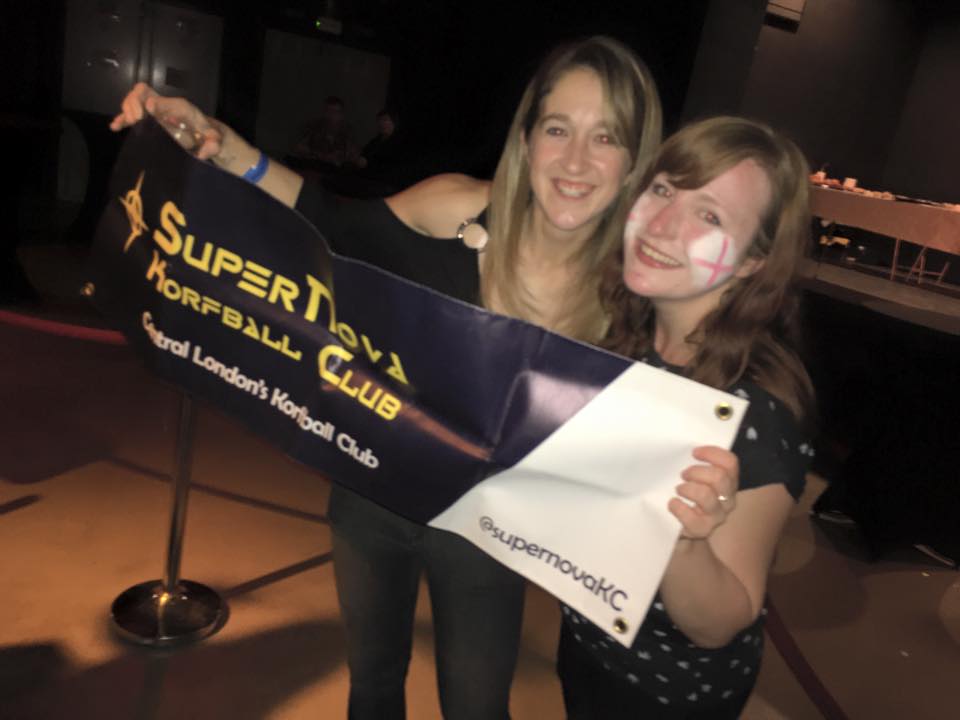 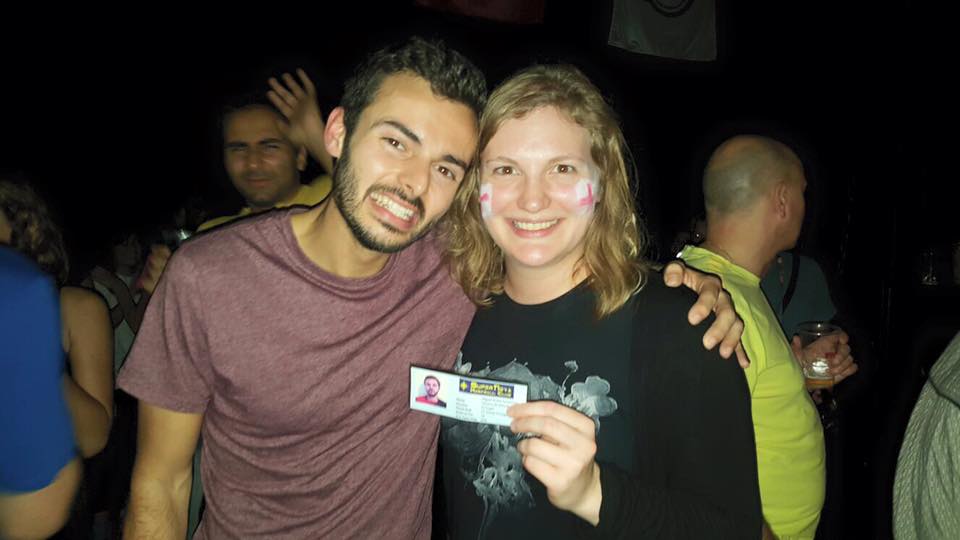 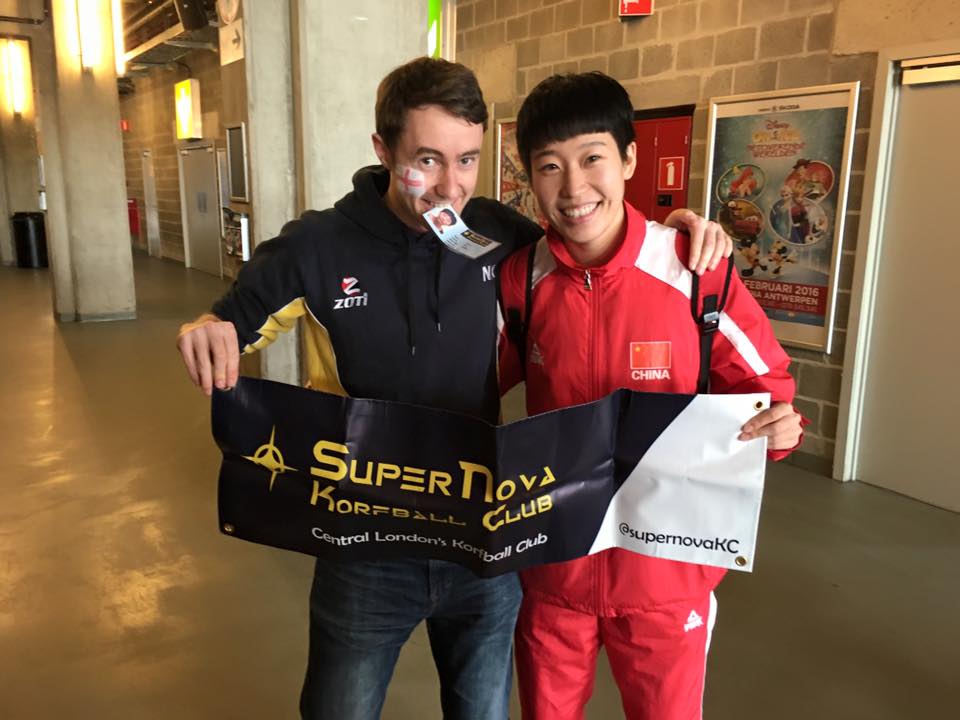 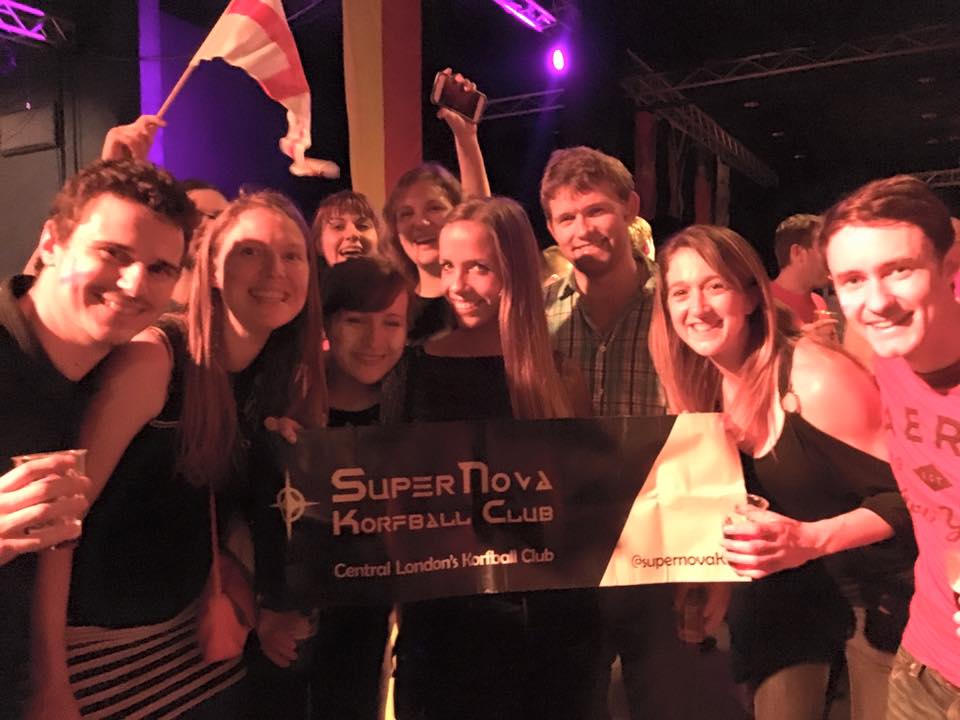 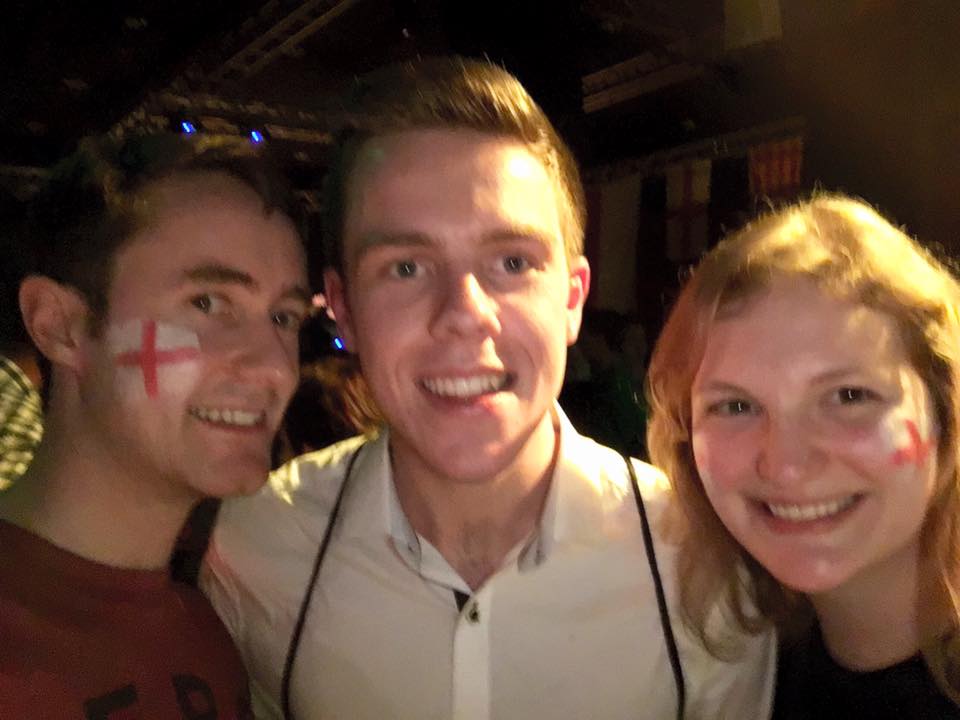 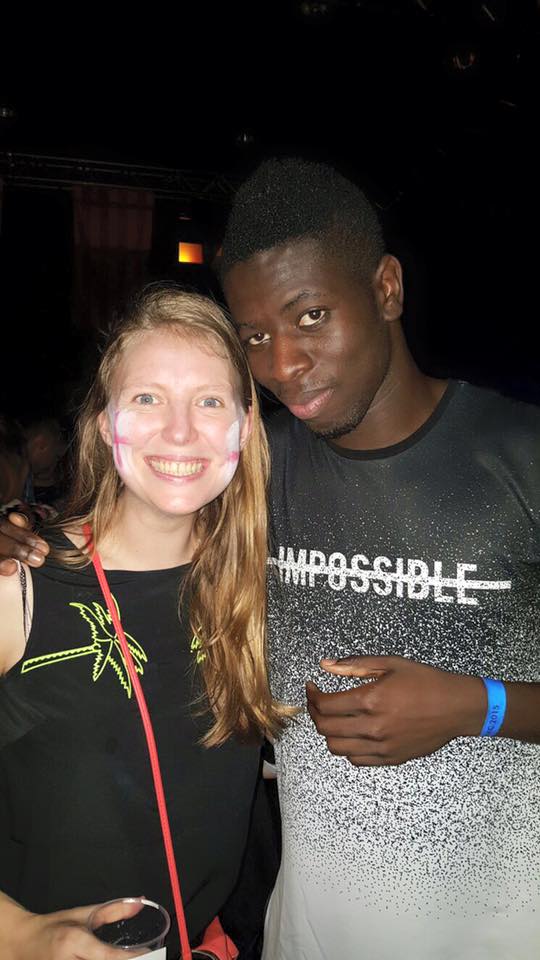